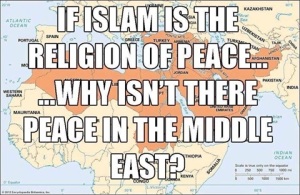 Americanism vs. Globalism – Democrats think we’re in a war of words with radicals who are “hijacking” Islam, while Republicans understand that this is a real war against savages who are killing any who oppose them.

America is more at war with itself than with the external enemies that are working at destroying us.  Trump and Hillary are now leading the opposing factions in America who see the country from opposite points of view.  To the Right, the nation is being destroyed by foreigners who are immigrating to America who don’t want to assimilate to become Americans, but make Americans to assimilate and become like them, and corrupt criminals in Washington are assisting them.  To the Left, America is a nation of greedy, racist haters who have imposed themselves on other nations to steal resources from them, and Americans are fearful of progress, fearful of other people, and selfishly refuse to become a nation of the world’s global culture.

The problem with America, leftists believe, is that self-righteous, hateful Christians are resistant to the good sense of atheists and the peaceful religion of Islam.  They label terrorists conducting mass shootings, bombings, and genocides as Islamist jihadis.  Obama and Hillary say they are not Islamists, but atheists who are trying to incite a war by duping Christians into condemning good Muslims.  Moslems who want to impose Sharia law on the world are good people they say.

Which candidate has the right solution?

Trump proposes declaring war on the Jihad and holding American citizens who join the Jihad as enemy combatants and the Left has gone apesh*t saying he would deny citizens their rights.  There is a vast gulf between the rights of citizens who commit crimes and people who are at war with America.  In every war in history those who side with the enemy to kill Americans are treated as the enemy, and today’s politically correct leftism is nothing less than insanity.

Hillary/Obama leftwingers promote America being reactive to terrorism, i.e. only stop them after they’ve done their killing.  Trump rightwinger promote being proactive and stopping them before they kill!  Who do you want protecting your children?

Obama – “we are in a narrative fight with ISIS”

Obama said at the UN

“Too often in capitals, decision makers have forgotten that democracy needs to be driven by civic engagement from the bottom up, not governance by experts from the top down.  And as leaders of democratic governance make the case for democracy abroad, we’d better strive harder to set a better example at home.”

Yet that is exactly what the Left wants – rule by the elites – and it is the Left that is setting the example of rioting, looting, and warring to force the majority to bend to their will rather than be good citizens as the righteous do.

“And in Europe and the United States you see people wrestle with concerns about immigration and changing demographics, and suggesting that somehow people who look different are corrupting the character of our countries.”

Trump vs. Hillary war of words over terrorism

The guarantee of Hillary or the potential of Trump?  Decline or rise

[Author’s Note: This is what you get when you elect a man of no accomplishment or substance besides being able to read well from a teleprompter as leader of the free world.  Obama’s racism, socialist ideology, and Islamism have been on display for the last ten years and world leaders have had to suffer his insufferable self-righteous nonsense that he believes to be wisdom.  The challenge of this century is not to allow Islam, the most oppressive and destructive religion in the history of the word, to spread.  The challenge is to educate Americans and Europeans who have been indoctrinated by the Left with lies about history and current events to make leftist ideology constructive rather than the force of destruction it has always been and always will be.

Hillary’s slogan: Stronger Together – what does it mean?  By extrapolation of Obama/Hillary agenda it means corrupt Democrats, America haters, criminals, illegals, and Moslems are stronger together against Americans.

Hillary, who wants to disarm Americans, has been called on by Trump to have her bodyguard’s give up their guns.  Democrats call suggesting this an “assassination plot.”  Wanting to disarm law-abiding American citizens is definitely a tyranny plot!

And on a happy note, Kaepernick is being cut from the 49ers.  He probably started his “protest” because he knew this was coming to set up a racism lawsuit.  In any case, the little putz had no right staging his protest against the very people who are paying him to entertain them and deserves to lose everything.  Actions have consequences, but leftists who believe in shutting down people’s businesses over cultural slights don’t believe they should suffer consequences themselves.]

This site is my opinion only and is unpaid. I am a retired Paramedic/Firefighter with 25 years of service in the City of Dallas Fire Dept. I have a B.A. degree in Journalism, and A.A. degrees in Military Science and History. I have spent my life studying military history, world history, American history, science, current events, and politics making me a qualified PhD, Senior Fellow of the Limbaugh Institute, and tenured Professor for Advanced Conservative Studies. 😄 It is my hope that readers can gain some knowledge and wisdom from my articles.
View all posts by dustyk103 →
This entry was posted in Election 2016, Islamism, Racism and tagged 2016 Presidential Campaign, Donald Trump, Hillary Clinton, Hillary says Trump is terrorist, Hillary's terror policies, Islam is peace, Islamic terrorism, Jihad, Trump's terror policies. Bookmark the permalink.