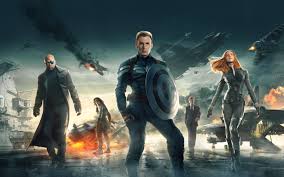 America’s most noble hero is assailed from within when Hydra infiltrates S.H.I.E.L.D. to destroy America from within.  This is a lesson to all patriotic Americans of how America’s enemies have corrupted the government in their attempt to overthrow American liberty to establish a socialist dictatorship.  In the 20th century socialism in the form of Communism, Nazism, Fascism, and Islamism crushed many nations and killed over a hundred million people in their bid for dominance.

There is no room for America in the New World Order.  The land of the free does not fit in with the absolute authority that is required by those who would make the world obedient to their will.  While Leftists like to pretend that it is the far right wing that is home to Nazism, the fact is that they are only projecting a reflection of themselves on the Right.  Socialists, whether Nazi or Communist, all crave totalitarian governments whereby to impose their will on others.  It is the ultimate dream of the control freak.

In the movie, “Captain America: The Winter Soldier,” they learn that SH.I.E.L.D. has been infiltrated and subverted by Hydra, the Nazi division.  This is not unlike the Hebrew Temple that was subverted by Pharisees who worked for their own glory rather than the Glory of God, until Jesus exposed them for the hypocrites there were and they used the Romans to crucify Him.  Also this is not unlike the Catholic Church of the Middle Ages, which evil men subverted to their purpose and initiated the Inquisition to eliminate any who would not bow to their authority.

Like the men of the First Crusader when they took Jerusalem, no one is spared, not Muslim, Jew, pagan, heretic, or Christian who defies their ultimate authority.  Any who do are destroyed and, as those men said, “God will know His own so let Him sort them out.”  The Left by any of their names, be they Nazis, Communists, Socialists, Fascists, Islamists, Progressives, or Liberals, are all dedicated to the proposition that government must rule the people, not serve them as in America.

In Christ there is no judgment of the sinner who is free to choose to serve God or himself.  The righteous are free and respect the freedom of others to choose, while the wicked impose their own moral authority on others.  This is the baseline difference between the Right and the Left.  This is why socialism requires tyranny over slaves while capitalism permits everyone the liberty to succeed on their own merits.

But the evil always seek to corrupt the good, and that has been happening in America every day and will continue to happen every day.  As each successive generation comes of age there will always be those who choose to serve themselves, and who learn to either use force or subversion to deceive others and bend them to their will.  No institution, no matter how noble, regardless of its intent, is safe from subversion by the Left.

Like those who in the movie who found out S.H.I.E.L.D. was a weapon that could be turned to evil, Americans understood that the security programs put in place by President George Bush could be subverted.  With Bush you knew where you stood and what he was about and with Obama we realize we are in that very dilemma.  The security provided by one Administration is violated by a new regime, and where Bush sought to stop America’s enemies, Islamist terrorists, Obama’s enemies are American patriots of the TEA Party on whom he has unleashed NSA spies and IRS oppression.

While there were no successful terrorist attacks under the Bush administration, under Obama there have been several.  The media tries to deflect for their king by dissembling and minimizing saying they were just “individuals.”  But these so-called “loners” were radicalized by the international terrorists of Al-Qaeda, the terror group Obama claimed was on the run and whose leaders had been destroyed.

Weapons are tools that can be used for good or can be turned to evil purpose.  The entire series of the Star Wars saga is about evil infiltrating and subverting the noble Republic and destroying its honorable protectors the Jedi, and the war to re-establish freedom for the people from the evil oppression of the Sith.  History, however, is filled with far more conquerors than liberators, which is what makes America an exceptional nation in that it has been a powerful force for liberation from tyrants in the world.

But America is now being subverted by Leftists who have infiltrated its institutions right down to pre-school and corrupted our young.  This revolution has been years in the making and will take years to overturn.  Proper education in both history and morality must be re-established in order for the land of the free and home of the brave to be reborn, and it will require forceful ejection of subversives that will not be accomplished peacefully.

Righteousness: God’s Love vs. self love

This site is my opinion only and is unpaid. I am a retired Paramedic/Firefighter with 25 years of service in the City of Dallas Fire Dept. I have a B.A. degree in Journalism, and A.A. degrees in Military Science and History. I have spent my life studying military history, world history, American history, science, current events, and politics making me a qualified PhD, Senior Fellow of the Limbaugh Institute, and tenured Professor Emeritus for Advanced Conservative Studies. 😄 It is my hope that readers can gain some knowledge and wisdom from my articles.
View all posts by dustyk103 →
This entry was posted in Right vs. Left. Bookmark the permalink.

22 Responses to Captain America and the New World Order